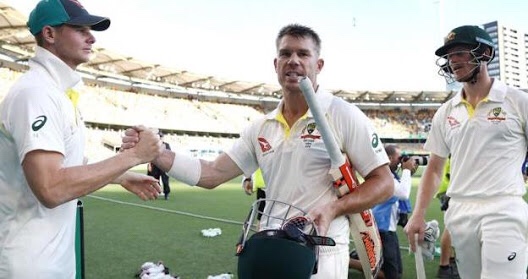 If you’re Australian, or anyone who lives in a country where Cricket dominates your sports news, you will have heard of the ball tampering scandal which occurred in the third Test between South Africa and Australia. I wasn’t going to comment on what happened anywhere on the inter webs, but the constant bombardment of the incident in Australian media is something I do want to comment on.

Today, when visiting my in-laws, my mother-in-Law commented, “how does it affect us?” and my instinctive response (and that of my father-in-Law) was that it affects all of us as the Australian Cricket team is the highest profile Australian sporting team that represents us outside of the country. Their behaviour, or misbehaviour in this case, is a reflection of our country. Or at least one reflection. But, perhaps it shouldn’t matter so much. At least not in the grand scheme of things.

However, the media is making it seem like it is the biggest issue facing us at the moment.

Some background: Steve Smith (Captain), David Warner (Vice-Captain) and Cameron Bancroft (in his first Test for Australia) were all implicated in a ball tampering incident during the Third Test in South Africa. Bancroft was caught on camera using sandpaper to try and rough up one side of the ball so he could get it to swing more. Note, it didn’t actually work, but the fact that he used a foreign object on the ball is against the Cricket Laws. (It is perfectly legal to shine the ball on ones pants to try and get one side smoother than the other…)

Steve Smith came out in a press conference and admitted to the fact that the leadership (I.e. he and Warner) were responsible for coming up with the idea…though subsequent “reports” in the media are suggesting that it was Warner’s idea and that he only brought Smith into it after he brought it up with Bancroft. However, whatever way you want to look at it, Smith did the right thing in taking ownership as the Captain.

Now, to come to what I really want to say. Every time I turned on the radio, or the sports news on TV in the last week or so, the ball-tampering has come up. People have called into the radio with some saying they should be banned for life…and basically crucifying them by saying things like “they’re not sorry for trying to cheat, they’re only sorry for getting caught.” And to be honest, I totally get where they are coming from. Maybe they aren’t truly sorry for trying to cheat. Maybe they are only sorry for being caught. But, that’s no grounds for saying their emotions in the subsequent press conferences were fake, or worthy of an Oscars.

For me it’s what the players decide to do now is what actually matters. If it means they never cheat again, then that’s the best result, is it not? Regardless of the initial motivation.

Also seeing this headline made me so upset..(it is from international news and not Australian) 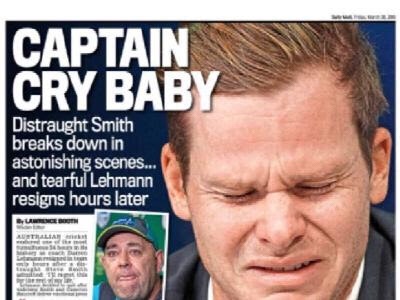 Sure, don’t believe that Smith is sorry for cheating…but this is bullying behaviour. He is human just like all of us, and we all make mistakes. And yes, this whole situation was caused by a mistake in judgement. Yes, it may have been a premeditated decision, but it was a decision made on a mistaken premise, a mistaken point of view, and that is where the mistake lies. In no way does calling it a mistake excuse the calculation behind the act, but it does show that as humans these players are not infallible. And they are prone to doing stupid things as we all are.

They are also able to learn from their mistakes, whether the mistake was deliberate or accidental.

I think what’s important is that Cricket Australia has come to a decision, has taken action and now it’s up to the players to either appeal the decisions handed down, or take it on the chin and work toward their return to the game in 2019. The media should back down and look to other issues that need to be reported on. Overwhelming us with, not just reports, but opinions on this issue just wears us down, and doesn’t help keep the facts straight. It’s also not helpful for the players. In a time where we are trying to advocate strongly for mental health, especially that of men, this is not appropriate behaviour by the media.

My biggest take away from this is this. We should not be judgemental toward these young men. They’ve done something that hopefully they will see was wrong. But, it’s not something worthy of dragging their names through the mud. After all, as Jesus said in the Bible, “Let any one of you who is without sin be the first to throw the stone.” None of us are perfect. We all do things that if they were done in the public eye could be seen as just as bad as what they’ve done, but the difference is no one sees it.

Anyway, let’s hope Smith, Warner and Bancroft use this incident to help them grow into even better cricketers, and more importantly better versions of themselves. And also let it teach us the fans, the supporters, the spectators of this great sport that there will be lows in our great game but that we can rise above it. Don’t allow this incident ruin the sport for you. The game has been around for hundreds of years… there have been worse scandals…and I can guarantee there will be more, but many more exciting and happy moments to outshine them. The game is greater than the individual players.

And remember, above all…don’t bully others. Cos, that just ain’t cricket.

One thought on “It Just Ain’t Cricket”