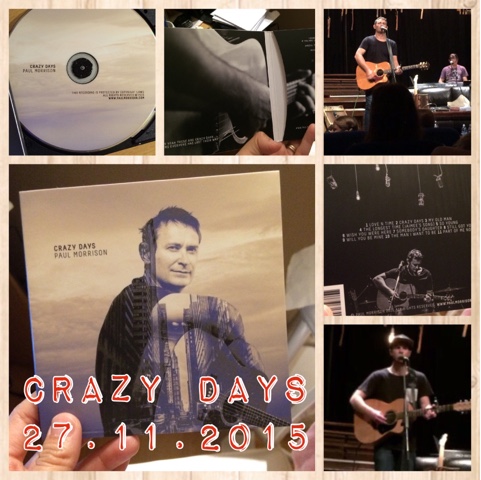 I went to the launch of Paul Morrison’s new album, Crazy Days, last night and it was pretty amazing.

It’s been 8 years since he last released an album (he’s released individual songs over the years, a couple in conjunction with the West Coast Eagles); and incidentally I was at his last album launch as well, which was at the same venue (in 2007).

His support act was a young WA talent, Ben Blondel playing as Death and a Cure. Produced by Chad Blondel (probably related?) who also produces Morro.

Death and a Cure performed a short six (?) song set. His guitar skills impressed me. And I really liked the song This Disease.

Look it up, you can find his back catalogue on Aussie iTunes.

After his set we had a short break before the host introduced Morro. His set began with a video that Adam Meredith (Senior Pastor of Red Door Community Church, the venue of the gig) had created for one of Morro’s songs; Will You Be Mine.

Then Morro came on with his band. And wow…

If you only know Morro for his radio gig and/or as the chaplain for the Eagles, then you don’t know what you’re missing. He is one of my all time favourite singer/songwriters.

He interspersed his singing with talk and stories 🙂 and half the set was just him and his guitar and sometimes harmonica as well. Amazing and beautiful.

If you ever get the chance, look him up on iTunes or Spotify. 🙂