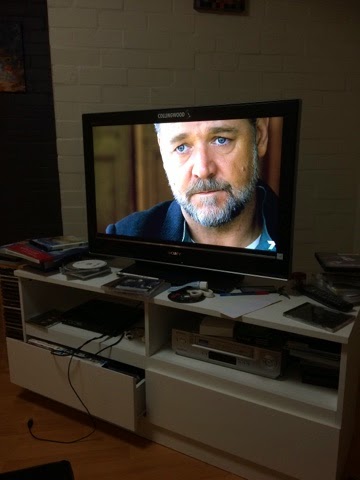 The opening scene, in the Turkish trenches, makes a big statement that this is not your typical ANZAC movie.  It’s something different.  Obviously.
And then Russell Crowe…maybe a little oddly if you don’t know one of his first movies, his first scene made me feel some childhood nostalgia.  He even has a Koolie this time round too.  (A type of Australian working dog – the movie I’m thinking of is The Silver Brumby; he had a Koolie then too)
Russell’s Joshua Connor is raw, real, a man who is not afraid to do everything to find his sons.   Though the movie starts off being about his story of searching for his sons, it is obvious that is a much bigger story and in a sense it seems to be more a story about the war from the Turkish side.
The woman he meets at the hotel he is led to has lost her husband to the war and her story becomes entwined with that of Connor’s.
And then the Turkish officers that Joshua “befriends” in a sense.  Seeing the events of Lone Pine from their perspective and the war that is still going on in the former Ottoman Empire is heart wrenching and extremely moving.
This feels like a movie about lost love, and the importance of remembering those who have lost their lives on both sides of the war.  It’s also about hope.
I know this review doesn’t make much sense, but it’s late at night; been put together piecemeal as I watch, and I’m crying because it’s so beautiful and moving and yes…. Ugly crying.
Best movie.