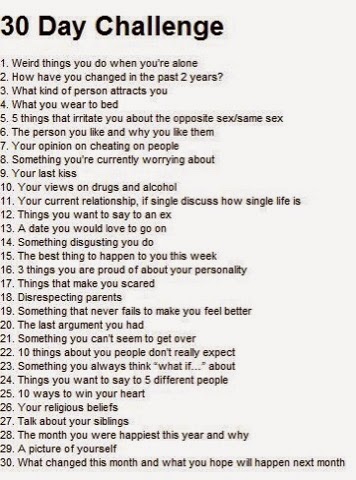 The last argument you had
I don’t really remember the last argument I had, which probably means it wasn’t all that important in the grand scheme of things. Knowing me, it would have been with my mum about something really pointless.  Or at least, something not worth getting all up in arms about.
That’s probably a good thing that I don’t remember, because arguments aren’t fun.  I don’t like arguing with people because sometimes it just leaves a bad feeling inside you.
Online I’ve gotten into “debates” about my beliefs but I don’t think they would’ve been the last arguments I’ve had.
Something you can’t seem to get over
I’ll have to think about this one, but it should be easy really.  There are several things that tend to get to me a lot.  Even when I know I should let it go.  I think the biggest thing for me is the Creation v evolution debate.  Both sides of the line approach the debate the wrong way without understanding the other.
And it’s something that often ends up irritating me.
I’m a Christian.  Yes.  But I’m a firm advocate of the Theory of Evolution as it stands. We don’t know God’s ways and means.  Only He does.  Who’s to say He didn’t utilise evolution to get the bios to where it is today?
My issue is with people who suggest that evolution has anything to do with the formation of the universe.  It doesn’t.  That’s as much science as alchemy was.  I also have a problem with the arguments  people who deny evolution come up with.
Yes God Created everything, but you can believe that and evolution can still be true. Yes, natural selection as Darwin presented it appeared random and what not….but did you ever stop to think that maybe it only LOOKS random to our human minds?  God is infinitely MORE than us and we are not given to understand everything He has done.
Not sure if that made any sense.  It does to me.
And in the end, it’s not important for our salvation.
10 things about you people don’t really expect
10 things? That’s tough.
Well let’s see.
1.  I love NRL.  It isn’t as obvious as my love for the footy so…there you have it
2. I can have quite a dirty mind.  So…not as innocent as I look and not afraid to admit that.  You should read my writing…or maybe not.
3. I don’t enjoy cooking at all.
4.  I’m against the death penalty
5.  I can be quite argumentative about things I’m passionate about
6.  I enjoy some heavy metal.
7.  I swear, but don’t tell my parents lol
8.  I can be quite shy
9. I can eat a lot
10.  I can’t think of ten things lol